We have worked on two main biocontrol projects that are effective in supporting farms with IPM insect pest control in environmentally friendly ways using native biocontrol species. First, utilizing entomopathogenic nematodes and second, banker plant projects, where cereal aphids are used as food to support populations of tiny wasps that kill the aphids afflicting local farms. When the wasps kill all the pestiferous aphids, they return to the cereal aphids for food.

See this helpful how-to sheet to get started with banker plants!

The green peach aphid Myzus persicae Sulzer (Hemiptera: Aphididae) and the melon aphid Aphis gossypii Glover (Hemiptera: Aphididae) are serious pests for growers of cucumbers, tomatoes, and a wide variety of crops. They suck nutrients out of the plant, by tapping into its sugar transportation tubes, known as phloem. This feeding behavior is accomplished using the aphid’s flexible yet needle-like stylets, which are modified mouthparts. Furthermore, the aphid’s liquid waste, known as honeydew, promotes the growth of sooty mold. The mold can block sunlight from reaching leaves. 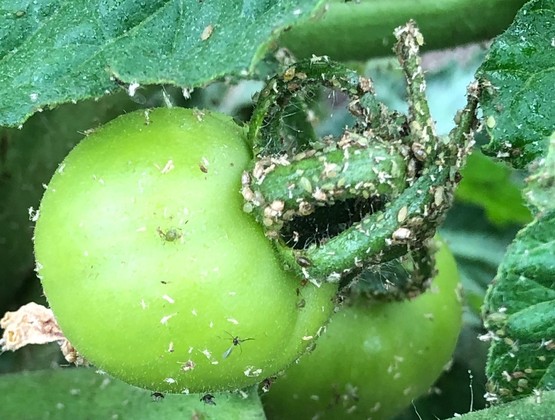 Organic growers have controlled these bugs with applications of PyGanic, an insecticidal soap that uses pyrethrin as an active ingredient. Pyrethrins are a class of organic compounds that are naturally found in the chrysanthemum plant. Although these soaps are effective at curbing aphid outbreaks, growers may be interested in a system that controls aphids without insecticides. Pyrethrins are lethal to bees. This damage can be especially harmful if the plant in need of protection also needs pollinators to produce fruit. Cucumbers are an example of an insect-pollinated plant that is beset by these aphids. 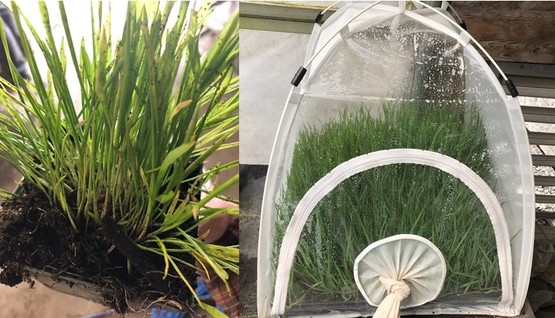 To establish the banker plants, plants and aphids were ordered from IPM Labs, potted in potting soil, and stored in a Bug Dorm, which is a structure that protects the aphids from predators. Once established, wasps were ordered from Beneficial Insectary. The farmer paid for the wasps, rye, and aphids. Once the aphid populations were robust, one banker plant was placed in each of three greenhouses, and approximately 80 wasps were released in each of the large structures. The typical application rate is 400 wasps per acre. 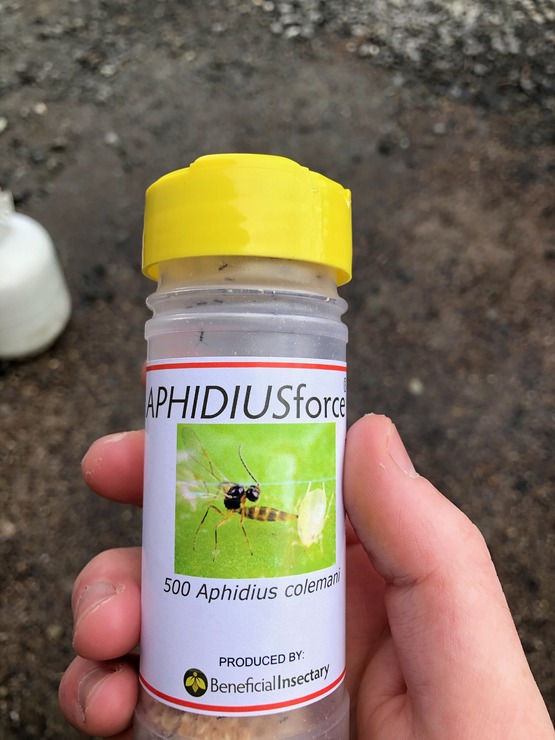 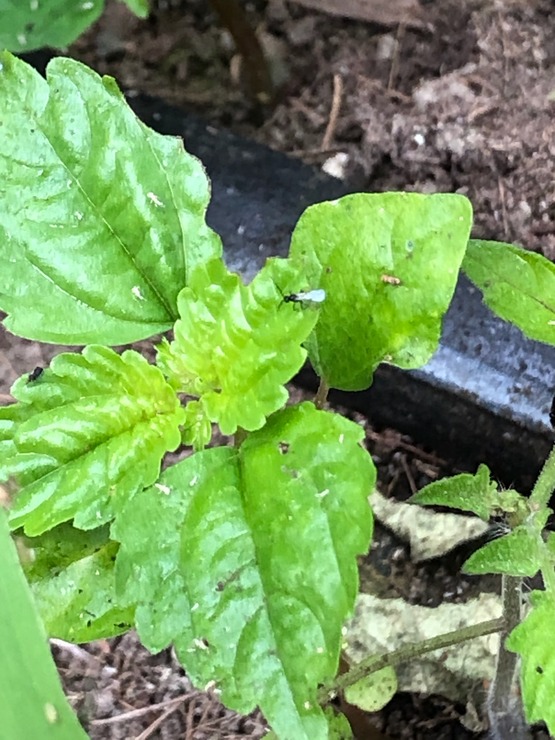 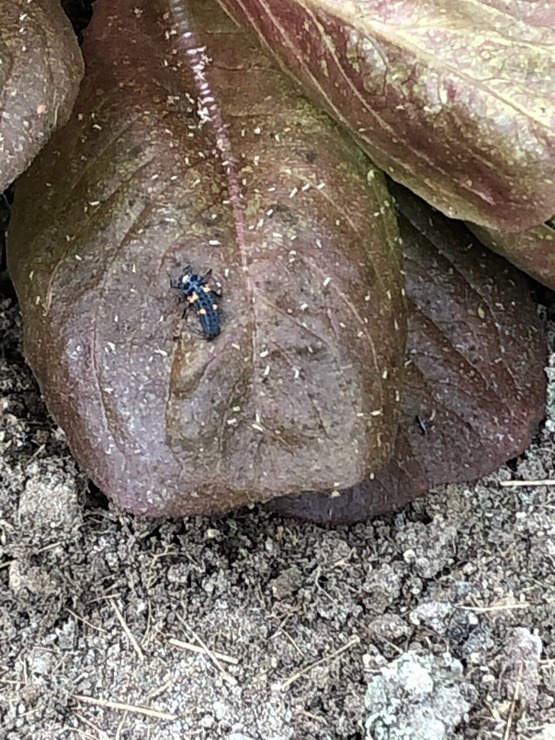 The banker plants must be replenished every two weeks. Once new plants are available, the bird cherry-oat aphid populations can be rebuilt. The new plants can then be introduced to the greenhouses, so that the parasitoid wasps have new food available, to sustain them until the next group of green peach aphids moves into the greenhouse. To verify that the wasps have reached a new generation, look for aphids that have been parasitized by wasps. These aphids, called mummies, look white. The wasps, which pupate within the host, emerge, leave holes in the aphid. 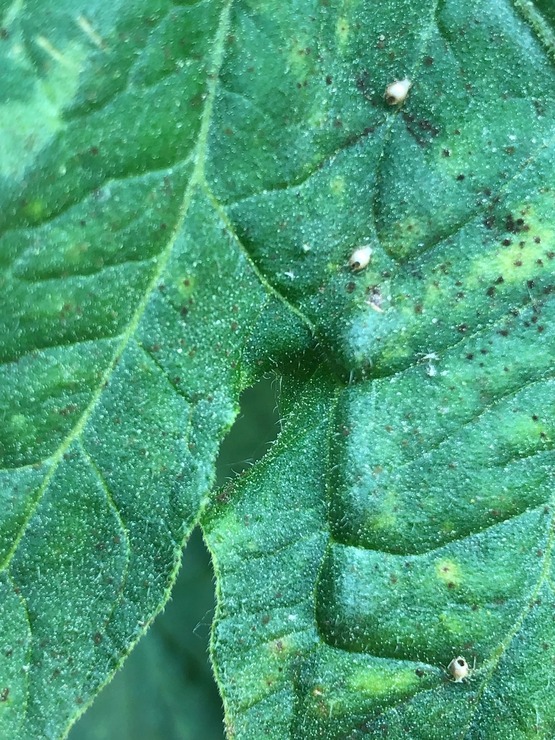 At the end of the growing season, the banker plant system should be destroyed, because the longer the banker plants are kept alive, the greater the odds of hyperparasitoid contamination. This process occurs when other wasps attack the larvae of A. colemani, while the wasp is within its host aphid. Such hyperparasitoids can devastate a crop of beneficial wasps.

One consideration for farmers looking to implement a banker plant project is that the bird cherry oat-aphid is a polyphagous insect. It can attack oats, corn, garlic, and lilies, as well as other plants. Growers with these crops might want to avoid bringing the bird cherry-oat aphid onto their property.

Another consideration for the farmer is that it is essential to accurately identify the aphids attacking their crop. Large aphids, like the potato aphid Macrosiphum euphorbiae Thomas (Hemiptera: Aphididae), are too big to support larvae of the A colemani, and require Aphidius ervi Haliday (Hymenoptera: Braconidae). Unfortunately, this wasp is not compatible with the bird cherry-oat aphid, which is too small to support A. ervi’s larvae. Using the Ervibank banker plant system from Koppert would be a better choice. This strategy cultivates the English grain aphid Sitobion avenae Fabricius (Hemiptera: Aphididae) on winter wheat.

For more information about banker plants, check out the following links:

The brochure below describes the method for using nematodes. It also provides information about the life cycle of the alfalfa snout beetle. Contact information for the Shields Lab can be found at the bottom of the document. Also, you can contact your local CCE for more information. 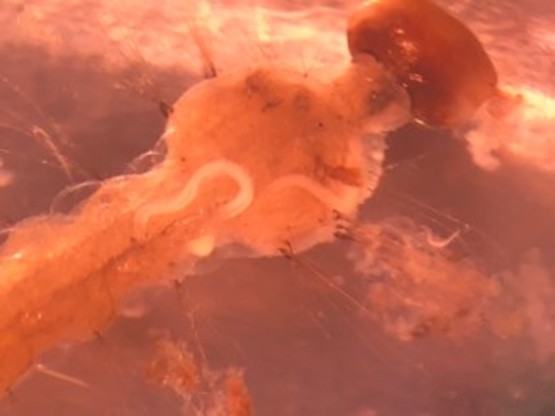 A local dairy farm has experienced issues with alfalfa snout beetle and corn rootworm. The beetles exacerbate cultivation concerns, in a field season beset by scorching temperatures and a dearth of rainfall. To combat both species, which live in the soil as larvae, the farmer applied nematodes of the species Steinernema feltiae and Steinernema carpocapsae. The nematodes were purchased from Mary DeBeer, and applied with the guidance of Kitty O'Neil.

Kitty was especially helpful for the process of calibrating spray equipment. The boom sprayer used to apply the nematodes needed to be stripped of all filters, and the nozzles were adjusted to ensure that the nematodes could survive the sprayer process. Water flows out of the sprayer at a much faster rate when then these adjustments are made. To compensate for the faster flow rate, the boom sprayer operator needed to drive about 6 miles per hour across the approximately 22 acre field. Two sprays were made, with about 200 gallons of water in each application. The water did not contain any chlorine, which is a harmful substance for the nematodes. 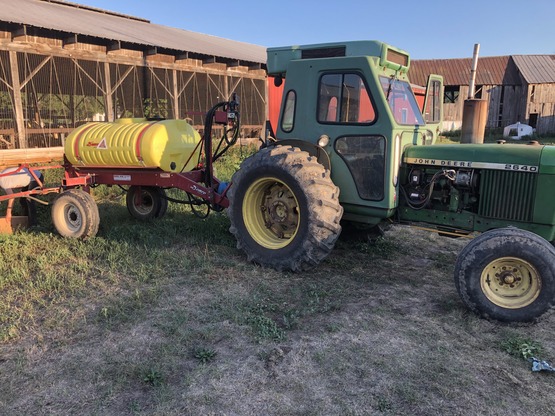 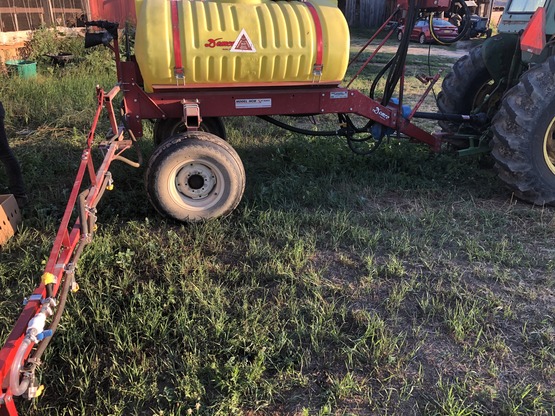 After the sprayer was calibrated properly, the nematodes were prepared for the sprayer. Nematodes came in blue bait buckets, and approximately four of them were needed per acre. The buckets were shipped in ventilated cardboard boxes. 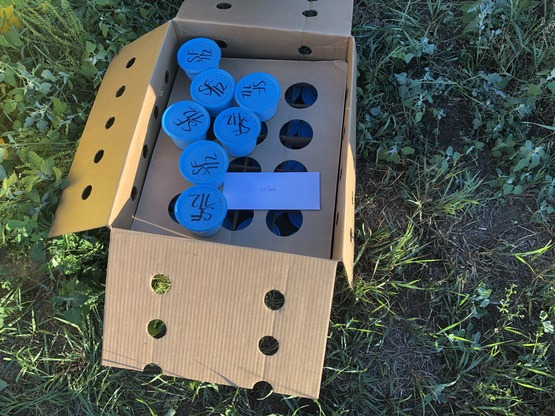 The blue bins in the above box were filled with sawdust, nematodes, and dead wax worm larvae that were serving as a habitat for the nematodes, which lived within them. The nematodes derive nutrition from their bacterial symbionts, which are grown by the nematodes within the dead insect. The noisome concoction was dumped into a sieve, and the nematodes were washed into bins. 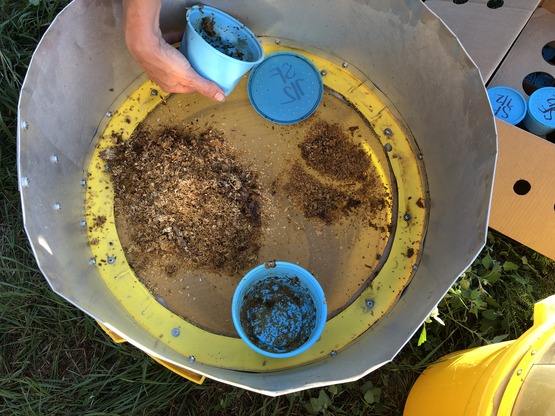 Nematodes lined the inside of the plastic containers, so the containers had to be rinsed with the hose. The yellow trash can below the sieve was mostly filled with water by the time the rinse process was complete. 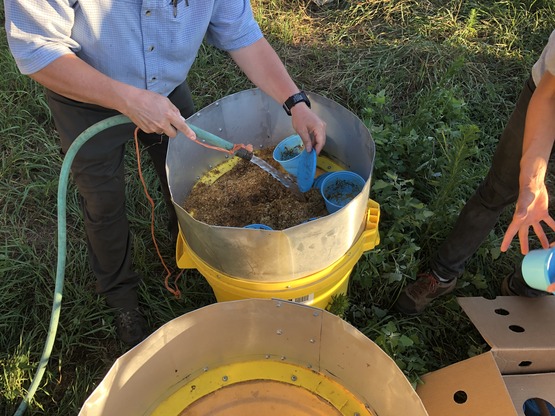 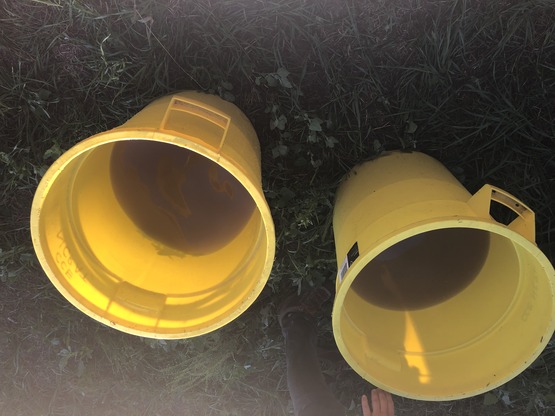 The slurry of nematodes, decaying wax worms, and small sawdust particles was then filtered by pouring it once more through the sieve, and then it was dumped into the tank. 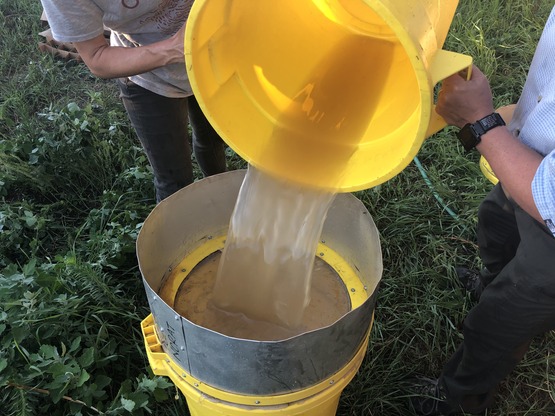 Once the nematode solution was filtered, it was loaded into the tank of the sprayer. Within 15 minutes, it was sprayed onto the field. Ideally, the nematodes should be sprayed as soon as possible after they are washed out of the blue buckets.

Below is a video of the spray process: